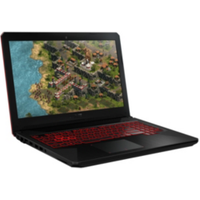 Basic games might need more than basic hardware. The FX504GE-DM040T is a good choice for casual gamers, offering enough CPU power, RAM and storage to get the job done – hardcore gamers may need something a little meatier though.

As a student or researcher, the FX504GE-DM040T provides a good balance of portability and performance. With b/g/n/ac WiFi support, you can easily roam between networks in libraries, offices and labs. This laptop gives you the tools you need to research and write outstanding papers.

You need to pack a lot into this screen, hence a resolution of 1920 x 1080 pixels pixels, you'll have sufficient visual clarity to decide which video sequence will give the impact you're looking for.

Continuously tweaking video clips are fun but requires a quite a bit of computing power. Which is why the memory size of 8 GB, the multi-core processor and the NVIDIA GeForce GTX 1050 Ti graphics card all combine to provide a level of performance that matches your needs.

The FX504GE-DM040T provides a great playground to create homemade tracks, mixes and audio effects. It offers ample storage for your music files with a total capacity of 1128 GB. Also, the Intel Core i7-8750H processor gives sufficient power for converting your work into various music file formats.

With its wide selection of ports the FX504GE-DM040T sits at the heart of your music production workflow. And with a total storage capacity of 1128 GB hard drive, you’ve got plenty of space to store work in progress

Modern productivity apps like Office 365 and Google G Suite are relatively lightweight – but it never hurts to have some power under the hood. The FX504GE-DM040T packs a decent Intel Core i7-8750H processor and 8 GB RAM so this is machine that will last.

The FX504GE-DM040T makes surfing the web easy thanks to a reasonable hardware specification and fast, reliable b/g/n/ac WiFi connectivity.

Although less powerful than other laptops, the FX504GE-DM040T is more than capable of keeping you connected to Facebook, Twitter and all the other social networks you love.

Designed to be carried about, the FX504GE-DM040T can be used everywhere in your home thanks to its 4 hours battery life.

The FX504GE-DM040T is the perfect size working on the move. With a battery life of 4 hours, this is a machine that slips easily into a bag and goes everywhere with you without worrying too much about the next time you need a charge.

The FX504GE-DM040T allows you to stay productive even when you need to pop out for a few hours thanks to its portability and 4 hours battery life.

The 4 hours battery life in the FX504GE-DM040T can keep you going while moving from one meeting space to another.

As you'll be needing to move about now and then, it's 2.3 kg weight should suit your needs just fine.

Not the smallest laptop, but this is a good choice for when you don't want a full-size PC. The FX504GE-DM040T works just as well on your lap or a desk.

The lights may be low, but that doesn’t mean you can’t work. The FX504GE-DM040T’s built-in 1 allows you to type accurately – even in the dark

When you spend all day typing, the quality of keyboard makes a big difference. The FX504GE-DM040T includes a numeric keypad to simplify the process of entering numbers into spreadsheets. And with a backlit keyboard, you can keep working long after the sun goes down too.

The FX504GE-DM040T comes in an unconventional package that stands out from the typical greys and blacks that are common with such devices.

Package that suits a Gamer

Not just a pretty face, the FX504GE-DM040T uses ergonomic design to give you a gaming advantage.