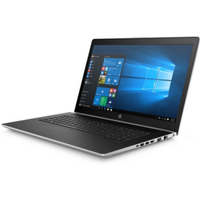 Achieve great photo editing results with the ProBook 470 G5 from . It comes with a large NVIDIA GeForce 930MX storage capacity for any pictures you keep on locally on the laptop. It also boasts a handy Memory Card Reader, making it incredibly easy to transfer pictures from your camera while on the move.

Basic games might need more than basic hardware. The ProBook 470 G5 is a good choice for casual gamers, offering enough CPU power, RAM and storage to get the job done – hardcore gamers may need something a little meatier though.

Light, portable, and full-featured, the ProBook 470 G5 is ideal for carrying between offices and libraries. You’ll have all the tools you need to research and write outstanding research papers and theses.

Whether you’re vlogging on YouTube, or putting together high-quality family videos, the ProBook 470 G5 can meet your needs.

Making your first steps in music editing? The ProBook 470 G5 has what it takes to deliver your audio craft.

The 17.3 inches screen gives you enough screen-space to wade through columns and rows

Modern productivity apps like Office 365 and Google G Suite are relatively lightweight – but it never hurts to have some power under the hood. The ProBook 470 G5 packs a decent Intel Core i5-8250U processor and 8 GB RAM so this is machine that will last.

The ProBook 470 G5 makes surfing the web easy thanks to a reasonable hardware specification and fast, reliable b/g/n/ac WiFi connectivity.

A sizeable 1000 GB drive allows you to download and manage hundreds of thousands of emails on the ProBook 470 G5.

Designed to be carried about, the ProBook 470 G5 can be used everywhere in your home thanks to its 9.5 hours battery life.

The 9.5 hours battery life in the ProBook 470 G5 is sufficient for short sessions of use in coffee shops, parks etc.

The ProBook 470 G5 allows you to stay productive even when you need to pop out for a few hours thanks to its portability and 9.5 hours battery life.

With an impressive run time of approximately 9.5 hours, the ProBook 470 G5 will keep you entertained, or working, throughout the duration of your trip.

If you’re always on the move around your office, you need a laptop that moves with you. The ProBook 470 G5 offers 9.5 hours of battery life so you can swap desks as much as you like between charges.

With a great run time of approximately 9.5 hours, there isn't a huge need to carry a charger each time your about.

Not the smallest laptop, but this is a good choice for when you don't want a full-size PC. The ProBook 470 G5 works just as well on your lap or a desk.

The ProBook 470 G5 is a great choice for when you need a good value, reliable laptop that won't be carried around too often. It’s not the smallest or lightest, however the 2.5 kg weight is enough to get the job done.

It's got a good variety of display ports which allows you connect to a good range of projectors and screen types.

The quality of keyboard is crucial to data entry, so the ProBook 470 G5 includes a numeric keypad to make your life easier. And the spill resistant keyboard protects you against accidental spills too.

When you want to stand out from the crowd, the ProBook 470 G5 uses bright colours and funky designs to turn heads. This is not your average laptop