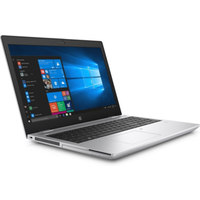 Running editing programs such as photoshop is possible due to the inclusion of 16 GB of RAM and the 4 cores-core processor.

Even more, you can render your image and design work with ease as this laptops comes with a robust graphics card with a strong 3Dmark benchmark score of 1124 .

As a student or researcher, the ProBook 650 G4 provides a good balance of portability and performance. With b/g/n/ac WiFi support, you can easily roam between networks in libraries, offices and labs. This laptop gives you the tools you need to research and write outstanding papers.

Enjoy watching / creating DVDs thanks to the built in disc-drive.

Whether you’re vlogging on YouTube, or putting together high-quality family videos, the ProBook 650 G4 can meet your needs.

When you need crystal clear audio and plenty of grunt for processing and encoding, the ProBook 650 G4 can handle everything you throw at it. A selection of ports allow you to connect instruments and devices, while the 1.6 GHz takes care of the actual production work.

Managing finances has never been simpler. The ProBook 650 G4 has enough processing power to manage even the largest spreadsheets. And the inclusion of a 1 makes typing and updating numbers even easier.

With a 7577 CPU and 16 GB of RAM, the ProBook 650 G4 is ideal for front-end development. Whether you’re coding basic HTML5, or working with more complex JavaScript frameworks, this laptop has everything you need.

Can handle a Full-Stack Coding Environment

Modern productivity apps like Office 365 and Google G Suite are relatively lightweight – but it never hurts to have some power under the hood. The ProBook 650 G4 packs a decent Intel Core i5-8250U processor and 16 GB RAM so this is machine that will last.

The ProBook 650 G4 makes surfing the web easy thanks to a reasonable hardware specification and fast, reliable b/g/n/ac WiFi connectivity.

Although less powerful than other laptops, the ProBook 650 G4 is more than capable of keeping you connected to Facebook, Twitter and all the other social networks you love.

Light and powerful, the 13 hours battery life of the ProBook 650 G4 allows it to be easily used all around the home for long periods without charging.

The 13 hours battery life in the ProBook 650 G4 is sufficient for short sessions of use in coffee shops, parks etc.

The ProBook 650 G4 allows you to stay productive even when you need to pop out for a few hours thanks to its portability and 13 hours battery life.

With an impressive run time of approximately 13 hours, the ProBook 650 G4 will keep you entertained, or working, throughout the duration of your trip.

The 13 hours battery life in the ProBook 650 G4 can keep you going while moving from one meeting space to another.

Not the smallest laptop, but this is a good choice for when you don't want a full-size PC. The ProBook 650 G4 works just as well on your lap or a desk.

The ProBook 650 G4 is a great choice for when you need a good value, reliable laptop that won't be carried around too often. It’s not the smallest or lightest, however the 2.2 kg weight is enough to get the job done.

Ensure everyone can see your presentation with the . With an 1 and several 1 you will always be able to connect to an external projector or screen.

The quality of keyboard is crucial to data entry, so the ProBook 650 G4 includes a numeric keypad to make your life easier.

When you're more concerned about what your laptop does than how it looks, the ProBook 650 G4 is a safe bet.