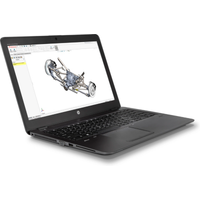 Whether your scoring on this year's FIFA or dominating on Fortnite, a basic laptop won't cut the mustard.

The 2.6 GHz  2 cores processor and AMD FirePro W4190M will ensure smooth gameplay and the advanced wifi ensure you'll be victorious in any adventure.

Light, portable, and full-featured, the ZBook 15u G4 is ideal for carrying between offices and libraries. You’ll have all the tools you need to research and write outstanding research papers and theses.

Making your first steps in music editing? The ZBook 15u G4 has what it takes to deliver your audio craft.

Capable of running spreadsheets or dedicated accounts software, the ZBook 15u G4 is perfect for keeping finances in check. And with a 1 you’ll find it even easier to enter and update figures.

Spreadsheets, presentations and documents, are relatively undemanding, but the Intel Core i5-7300U processor and 8 GB RAM ensures even image laden files won't leave you watching the 'spinning wheel' on the ZBook 15u G4

Sending and receiving email is a relatively lightweight activity that the ZBook 15u G4 can comfortably handle. It also comes with of total storage so you never have to delete a message or attachment again.

Although less powerful than other laptops, the ZBook 15u G4 is more than capable of keeping you connected to Facebook, Twitter and all the other social networks you love.

Light and powerful, the 7 hours battery life of the ZBook 15u G4 allows it to be easily used all around the home for long periods without charging.

For anyone who works on the road, or outside the office, portability is everything. With a battery life of 7 hours, the ZBook 15u G4 can go the distance for you while working on the move.

Lightweight and compact, the ZBook 15u G4 boasts 7 hours battery life to keep you going while on short trips like the daily commute on the train or subway.

The 7 hours battery life in the ZBook 15u G4 can keep you going while moving from one meeting space to another.

As you'll be needing to move about now and then, it's 1.9 kg weight should suit your needs just fine.

The ZBook 15u G4 is a great choice for when you need a good value, reliable laptop that won't be carried around too often. It’s not the smallest or lightest, however the 1.9 kg weight is enough to get the job done.

The light may be low, but the ZBook 15u G4 allows you to work or play around the clock. Make every keystroke count thanks to the 1 .

When you spend all day typing, the quality of keyboard makes a big difference. The ZBook 15u G4 includes a numeric keypad to simplify the process of entering numbers into spreadsheets. And with a backlit keyboard, you can keep working long after the sun goes down too.

When you're more concerned about what your laptop does than how it looks, the ZBook 15u G4 is a safe bet.

The ZBook 15u G4 has got the traditional corporate look and will definitely blend in within the enterprise environment.