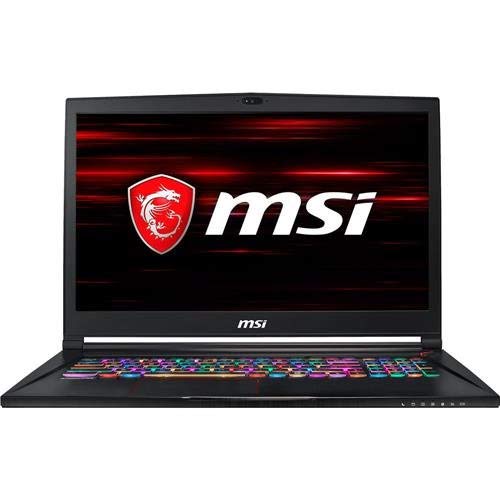 Click, shoot, scroll, or type, the Gaming GS73 Stealth-016 is more than capable of running light games that don’t require high end hardware. And at C$3,450.62, this laptop won’t break the bank either.

As a student or researcher in the social or physical sciences, this device provides a good balance of portability (with it's 17.3 inches screen size) and performance so that you're free to roam the labs or libraries with a machine that can competently multi-task your data crunching, "multi-tabbed browsing" and the production of academic content.

With a resolution of 1920 x 1080 pixels pixels, you'll have sufficient visual clarity to decide which video sequence will give the impact you're looking for. With 8 GB GB RAM, and a Intel Core i7 CPU, the Gaming GS73 Stealth-016 delivers great results.

Making your first steps in music editing? The Gaming GS73 Stealth-016 has what it takes to deliver your audio craft.

With its wide selection of ports the Gaming GS73 Stealth-016 sits at the heart of your music production workflow. And with a total storage capacity of 2256 GB hard drive, you’ve got plenty of space to store work in progress

Managing finances has never been simpler. The Gaming GS73 Stealth-016 has enough processing power to manage even the largest spreadsheets. And the inclusion of a 1 makes typing and updating numbers even easier.

Spreadsheets, presentations and documents, are relatively undemanding, but the Intel Core i7-8750H processor and 8 GB RAM ensures even image laden files won't leave you watching the 'spinning wheel' on the Gaming GS73 Stealth-016

A sizeable 2000 GB drive allows you to download and manage hundreds of thousands of emails on the Gaming GS73 Stealth-016.

Although less powerful than other laptops, the Gaming GS73 Stealth-016 is more than capable of keeping you connected to Facebook, Twitter and all the other social networks you love.

As you'll be needing to move about now and then, it's 2.4 kg weight should suit your needs just fine.

The Gaming GS73 Stealth-016 is a great choice for when you need a good value, reliable laptop that won't be carried around too often. It’s not the smallest or lightest, however the 2.4 kg weight is enough to get the job done.

The light may be low, but the Gaming GS73 Stealth-016 allows you to work or play around the clock. Make every keystroke count thanks to the 1 .

When you spend all day typing, the quality of keyboard makes a big difference. The Gaming GS73 Stealth-016 includes a numeric keypad to simplify the process of entering numbers into spreadsheets. And with a backlit keyboard, you can keep working long after the sun goes down too.

Fed up with the black and grey machines that dominate the laptop market? The bold colours and exciting design of the 1 offer a very funky alternative.

Package that suits a Gamer

Combining style and ergonomics, the Gaming GS73 Stealth-016 is built for hardcore gaming on the move.

With new and improved performance, the MSI Stealth is the laptop for those that want to sneak up on their enemies with improved power and performance. Never run out of breath with the intensive and complex cooling system, made up from 47 fans that work to keep your laptop at a safe temperature no matter how intense the battle is. See your battles coming together in style, with a 3840 x 2160 pixel resolution that will thrill at every turn, with utter precision and the ability to view smooth graphics even in the most heated gaming sessions. It does not end there, with TrueColor Technology that uses a calibration process to gift you the richest colors in the business to suit both your game and the environment that you are playing in. Take your graphics to the next level with this VR-ready system and see a glimpse of the future with VR optimized visuals.